It is common for most women to feel like they are losing a lot blood during menstruation. This is understandable because it’s impossible or impractical at the very least to measure the actual amount of menstrual flow in order to know whether the blood amount is normal or excessively heavy.

The following write-up will hopefully help you to understand more as it has information on how much blood will you normally loose during menstruation.

Menstruation, or a period, represents a major phase of puberty in girls, as it’s one of the physical signs of becoming a woman. Like many other changes which come with puberty, menstruation at times can be confusing.

You have some girls who cannot wait for their periods to start, while others might feel anxious or afraid. For the most part, many girls do not completely understand the reproductive system of a woman or exactly what takes place throughout the menstrual cycle, and this can make the entire process seem more mysterious.

The menstrual cycle will occur nearly every month for several decades until a woman gets to the menopause stage where their ovaries can no longer release eggs, with the exception of when a woman is pregnant or lactating.

This cycle can be counted from the beginning of one period to the beginning of the next. Bear in mind that periods are usually irregular when girls are just starting to menstruate, as the body might take some time to sort out the changes. For example, a girl might have a twenty-eight day cycle for two months and then miss one month.

After one or two years, the menstrual cycle usually becomes more regular, though some women will still have irregular periods during adulthood.

How Much Blood Will You Normally Loose During Menstruation

The amount of blood that is lost during a period will vary from one person to another. Your flow might start out being light before getting heavier and then lighter again.

Depending on how heavy your flow is, you could lose between two to six tablespoons of blood for each period. [1] [2]

This could be as much as one cup for some. Since the amount of blood loss varies with individual, it is normal to lose two tablespoons, or one and a half deciliters. You could be anemic if you are bleeding very heavily. A heavy menstrual bleeding is known as menorrhagia.

In most cases, women don’t realize that their bleeding is too heavy because it is normal for them to lose that amount of blood. However, this is not normal, as you could become extremely anemic from the heavy flow.

Although there is a great variation, an average period will occur every twenty-eight days and last for about four days with a total blood loss of around two to three tablespoons. When it comes to menstrual bleeding that is heavy, the amount of blood you lose will not be as important as how your life is going to be impacted.

A normal menstrual cycle will not interfere with your ability to function normal day to day routine. However, it will not be normal if you are concerned about running to the bathroom more often than usual or if you are experiencing a lot of discomfort or pain.

Here are some of the signs and symptoms of a heavy period, or menorrhagia:

A woman can experience heavy bleeding during their period at any age. However, it might happen more often when you get close to menopause and start to skip periods.

When Menstrual Bleeding is heavy

If you discover that you have to put your life on hold monthly because of your period, its best to see your ob-gyn or doctor. You might be worrying constantly about leaking through a pad or having cramps that make you double over.

Heavy menstrual bleeding can happen because of a number of things, from uterine fibroids to hormonal imbalances.

There are actually many options available for heavy periods, so you have absolutely no reason not to take care of your health or put your life on hold. If you are really concerned about how much blood you will normally loose during menstruation, you should visit your doctor for a check-up.

Talk openly with your doctor to get the answers that you need as well as the best treatment for your heavy periods. 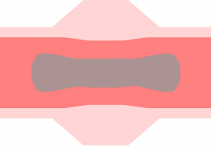